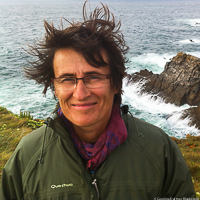 
About me :
Catching life...
Over time, driven by the desire always stronger to celebrate our fragile and precious Nature, I've, slowly & surely, created an intimate & poetic inventory.
Photographer of life: Fascinated by transformation, metamorphosis and mutation…an observer of signs of life and the traces left by the passage of time. Through long-term art projects and photography series on the natural world, I try to reveal the signs. During my career as an actress, I explored these themes and, today, I continue my research through the lens of photography. Since leaving theater in 2006, I studied photography at Gobelins School of the Image in Paris and now devote myself entirely to photography.
Resides between Paris and Bellême (South Normandy).

2017 November - EXHIBITION "Perchée & Corsée" - Ode to autumn & winter season - The most poetic moment of the year - during which Mother Nature offers the most prodigious fineries. The Paris exhibition presented a selection of landscape photographies from two regions as dissimilar as they are unique : South Corsica & Le Perche region in South Normandy.  Paris 03, Espace Oppidum - Nov. 21st - December 03rd, 2017

2017 August  - EXHIBITION "CUVEE DU PERCHE" - in collaboration with Isabelle de Noaillat, graphic artist & sculptor.
In the ancient salt storehouse of the 15th century gateway porch of Bellême will be displayed a selection of my photographies of Le Perche region (Collection 2011-2017) with a variety of bronze, terracotta & wooden sculptures.

2011 – 2017 – LE PERCHE REGION OFF-SEASON ; STUDY OF LINES & CURVES OF NORMANDY
The slow & gentle autumn colours fading process, the endless winter sleeping landscapes, where everything is simple and pure. Amongst hills and valleys of the famous Perche region (in South of Normandy), empty sceneries reveal beautiful lines & curves. Only the essential remains.

2014 - 2017 - SERIE NOIRE - FLORAL PORTRAITS
Nature's agitation at spring time provokes equally moving and rejoicing feelings. Passing from a sleeping and dull nature back to bright and invigorating colors... from dark days to brilliant sunshine, from cold to warm... I’m always surprised and disturbed. "Série Noire" presents this duality I experience every spring.

2015 – 2017 - PARADISE FOR LITTLE CREATURES
Study of the micro world of hidden undergrowth. A mysterious and enchanting world. Childhood desire.

2009 – 2017 – CORSOGRAPHY
Work about remarkable natural sites & landscapes in South Corsica, all through the seasons.
Corsica is an ongoing 'live performance'. Situated in the heart of the Mediterranean, this 'mountain in the sea' offers a diversity of breathtaking experiences. I Remain constantly amazed by the emotional power of this generous nature. The incredible variation of light reveals a rebellious, and plentiful nature. Depending on the season and moments within time, she is literally transformed, certain spots become unrecognisable. Corsica transports me to faraway shores in other countries : the Caribbean, Normandy, Ireland and even Siberia. This project started in 2009.
(Focusing on the deep South of Corsica, the mountainous region of Alta Rocca, Porto-Vecchio, Bonifacio, Figari & Pianottoli-Caldarello) Exhibited in Paris in 2013

2009-2017 - GROWING & FLOURISHING
Portraits of adolescents – Evanescent moments of transition from the child to a woman or a man. Regular follow-up sessions of a group of teenagers from 12 to 19 years old since 2009. The project will end when the youngest 12 years old will be 19 years old... in 2017.

2016 MAY - EXHIBITION "Landscapes & Floral portraits"
For the first time, Caroline Dattner Blankstein present a selection from different ongoing projects of the last 10 years. Among landscapes & floral portraits, it is 47 photographies to be displayed. Over time, driven by her desire always stronger to celebrate the fragile and precious nature, she, slowly & surely, created an intimate & poetic inventory. This work focuses on familiar territories where she enjoys going back whatever the season. It concerns what she considers now to be her two adopted homelands : Le Perche region (in the South of Normandy) and South Corsica but also - more recently - the Swedish Archipelago– her second homeland. These regions offer an exceptional and rich variety of landscapes where Mother Nature reveals stunning sceneries which never fail to move her. Taken together, these regions compose her unbelievable ‘secret garden’.
*** Added to the exhibition a portraits serie of Parisian pigeons realised in 2011 after an unexpected meeting.
Limited edition, signed & numbered

2016 – THE SWEDISH ARCHIPELAGO
The land of my childhood.

2009-2014 - Traces of the past : the renovation of the CARREAU du TEMPLE – Paris
The Carreau du Temple is an old Parisian market hall, Art Nouveau style, classified French National Historic Monument. As a photographer and a Parisian living nearby for a number of years, reporting the changes & metamorphosis during the renovation process became a priority. This project proved to be not only a fascinating journey back in time but also an enriching and captivating introspection. The edifice is one of the most sublime and yet fragile survivor of the 19th century French industrial architecture in Paris. Its famous font & steel structure covered by a glass roof was designed by Julien de Mérindol, largely inspired by the revolutionary conception of French architect Victor Baltard. Eiffel himself being one of Baltard's strongest admirers underlying his vision and audacity. Fascinated by this spectacular building imposing its “Grande époque” style, I've followed up the major renovation works lasting almost 5 years.
Planned to become a multiple-use area for cultural & sport activities by the City of Paris, the rehabilitation of the new Carreau du Temple was designed by Jean-François Milou and directed by Thomas Rouyrre. The Opening took place on April 2014. Located right in the center of the city in Le Marais district (3rdarr.), it is not only a remarkable architectural reference but it is also a living heritage of the social Parisian life having its origins back in the 12th century. Among its famous occupants, one can mention : The Knights Templars, The Order of Malta, and last but not least, Louis XVI and Marie-Antoinette prior to their execution... It later became a famous marketplace dedicated to the sale of clothing & second-hand leather clothing until the 70's. (Maître d'oeuvre Architecte Studio Milou ; Maître d'ouvrage : Ville de Paris – Agence des Grands Projets, Direction du Patrimoine et de l'Architecture, Direction de la Jeunesse et des Sports) - Virginie Katzwedel, Architecte-voyer chef de projet).